Snows possible through the weekend

The partly cloudy skies over the Steamboat Springs area have turned cloudy with light snow showers observed around the Yampa Valley this Thursday noon. Snow showers will continue today and tonight before decreasing for Friday. But they pick up again on Saturday with the possibility of persistent and moderate to heavy snowfall by Saturday night and Sunday, though uncertainty is high. A short break is advertised for part of Monday before a colder storm may move through later in the day or Tuesday.

A large and powerful storm currently located in the southwest corner of the U.S. is forecast to slowly move across the Desert Southwest on Friday and eventually Colorado on Saturday and Sunday. The storm is large enough to draw moisture from the Gulf of Mexico northward over the next three days and provide the fuel for heavy to excessive snowfall over the Front Range by Saturday afternoon and overnight.

Ahead of the storm, though, we will continue to see periods of snow showers and sun during the day today, with the snow showers lingering into the night. Only 1-4” is expected for the Friday morning report.

As the storm crosses the Desert Southwest and southern Great Basin on Friday, some dry air looks to move over our area for a less showery day than today. Weather forecast models still disagree on how quickly the storm approaches our area, so we may see snow showers redevelop by Friday night, though accumulations by Saturday morning look quite light.

The storm is forecast to be near the Four Corners region around Saturday morning, and this is the time when the ingredients come together for heavy snowfall rates to inundate the Front Range and foothills. Travel will become difficult to impossible down there by Saturday afternoon and overnight, especially in the foothills.

For those lucky enough to live or already be in the mountains on Saturday, snow showers are forecast to increase during the day Saturday with winds from the east developing. While the Steamboat area usually sees dry and windy weather when easterly winds downslope off the Park Range to our east, strong storms can sometimes produce moderate to heavy snows over our area as moisture-rich air moves first over Continental Divide and then over the cold air near the surface that is associated with the storm.

The current forecast has this situation developing, with the snow showers later Saturday becoming moderate to heavy and more persistent by Saturday night and Sunday. There is a high boom or bust potential with this storm for our area, with a reasonable forecast of 4-8” by Sunday morning and an additional 3-6” during the day and overnight Sunday.

There will be a short break in the action on Monday before another colder storm that is currently over the Gulf of Alaska crosses the Pacific Northwest coast and moves by either later Monday, as forecast by the European ECMWF or Tuesday as forecast by the American GFS. The uncertainty is related to how much the storm splits and how much cold air from the Yukon mixes into the storm.

We have a lot of weather to get through before a more certain forecast emerges for the early work week storm, so look for more details in my next regularly scheduled weather narrative on Sunday afternoon. This one may be several hours late depending on how the weekend storm storm affects our area on Sunday.

Temperatures are 36 F at the Bob Adams airport and 34 F at the top of the Steamboat Ski Resort late this sunny Sunday morning on their way toward fifty in town. More warm temperatures are forecast for the beginning of the work week before a pattern change turns our weather unsettled by Wednesday which persists into next weekend.

Southwest flow ahead of a large storm currently in the Gulf of Alaska has brought dry air, sunny skies and warm temperatures to the Steamboat Springs area this weekend. The storm is forecast to drop southward along the West Coast early in the work week after mixing with some cold air sourced from Baffin Bay west of Greenland.

Our temperatures will stay ten to fifteen degrees above our average of 39 F from today through Tuesday, with the sunny skies briefly interrupted during the first half of Monday as a weak and moisture-starved wave south of the Gulf of Alaska storm is quickly escorted past our area by brisk winds from the southwest.

Enjoy the beautiful springlike weather preview as a wave of energy and moisture is forecast to eject out of the southward-moving main storm and move over our area Tuesday night, beginning a stretch of cooler and unsettled weather with temperatures closer to average.

The leading wave is relatively weak with only light snow showers expected Tuesday night and Wednesday, with perhaps an inch reported Wednesday morning at mid-mountain and another several inches reported during the day.

The main storm is forecast to continue to move southward along the West Coast on Wednesday before turning inland and entering the Desert Southwest on Thursday. The weather forecast becomes more nebulous by the end of the work week as additional hard-to-time and hard-to-place waves of energy and moisture eject out of the main storm. There is loose weather forecast model agreement that we may pick up an additional several inches of snow around Thursday and Thursday night, but significant accumulations look unlikely.

Weather forecast model disagree about how fast the main storm traverses the Desert Southwest, with the American GFS quite a bit faster than the slower and more plodding European ECMWF. While additional minor accumulations of an inch or two are likely on Friday, our snowfall potential for the weekend will depend on how quickly the main storm moves across the Desert Southwest.

So we may see an additional inch or two over the weekend if the storm moves faster, or just cloudy and cool weather before a slower-moving storm brings that light snowfall to our area early in the following work week. And for those traveling to the Front Range late in the work week or during the weekend, it does look they will be in store for a significant precipitation event as easterly winds carry moisture-rich air first over the Eastern Plains incline and eventually over the foothills.

Stay tuned to my next regularly scheduled weather narrative on Thursday afternoon where I’ll discuss the evolution of that Desert Southwest storm and another possible storm for our area during the next work week. 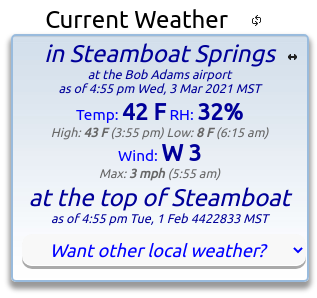