Next storm for later Friday into Saturday followed by cold temperatures

After the 7” reported at mid-mountain at the Steamboat Ski Area this morning, and 8” up top, the Steamboat Springs area will see a brief break in the weather ahead of our next storm which is currently pounding the Sierras with snowfall.

The Sierra storm will move through the Great Basin on Friday, and ahead of it we will see some clearing this Thursday afternoon as relatively warm southwest flow ahead of the storm first brings some drying, followed by a slug of moisture that may produce minor snowfall accumulations around sunset and into the evening.

Though the storm is not very cold, we will see a cool front pass through northern Colorado around midday Friday which will swing the winds towards our favorable northwest direction and produce moderate snowfall rates for a time. Lighter snowfall looks to continue overnight and into Saturday before tapering off late in the day. I would expect 4-8” of snow to be reported by Saturday morning, with some Steamboat Magic occurring between report time and ski time for bonus accumulations.

This storm is pushed eastward by another storm that is currently in the Gulf of Alaska but is forecast to be entering the Great Basin early in the weekend. This one has far colder air but far less moisture, so look for a cooler and mostly dry Sunday followed by an unseasonably cold Monday morning with low temperatures ten or fifteen degrees below our 10 F average.

Our weather will depend on the which airmass is over our area; currently the cold air is forecast to be in place through Tuesday, with some snow showers through the day Monday, especially in the afternoon, producing several inches of fluffy low-density snowfall.

There looks to be no more accumulations during a still-cool Tuesday.

A warm front ahead of the finally-moving-eastward Pacific storm may bring some light snow showers to the central and northern mountains around Tuesday night into early Wednesday, though accumulations should be quite light for our area.

The Pacific storm is forecast to be in the vicinity of the Great Basin after midweek, and even though the heaviest accumulations look to stay south of our area, we will have a good chance of accumulating snows as this storm moves past. Timing is subject to change, but right now we could see a period of good snowfall from Thursday night through Friday night before a ridge of high pressure temporarily builds over the west for the following weekend.

Several days of sun followed by another round of unsettled weather

A ridge of high pressure currently over the West Coast will move over the Rockies by Tuesday and bring clearing skies over the Steamboat Springs area starting this Sunday afternoon through Tuesday. The weather then turns unsettled around midweek and likely stormy near the end of the work week and into next weekend as incoming Pacific energy once again impacts the West.

The light and fluffy snow currently falling in Steamboat Springs should end this morning as drier air enters the area, bringing periods of sun by this afternoon, especially in the valley. Seasonably cool temperatures below our average high of 35 F and average low of 12 F will persist today and Monday as a couple of waves of cool dry air from the Canadian Plains slides southward along the east side of the ridge of high pressure currently to our west.

Tuesday will be likely be the nicest day of the week as the ridge of high pressure moves directly overhead. But incoming Pacific energy keeps the ridge moving eastward, and there will be an increase in clouds by Wednesday with perhaps some sparse snow showers ahead of the next storm cycle.

Several waves of Pacific energy will bring stormier weather back to the West starting around Thursday. There is considerable uncertainty in the weather forecast models with respect to the timing and strength of these waves, but current trends indicate a good chance for accumulating snows on Thursday, and after a short break, Friday into Saturday. The forecast for the early weekend storm is a bit of a wildcard, as it is not clear if the storm will move quickly through our area or move more slowly to our south, and this will greatly affect our snowfall totals.

Another storm may follow later in the weekend, according to the American GFS, or be shunted to our north, according to the European ECMWF. The cause of disagreement is related to a ridge of high pressure that is forecast to build in the Gulf of Alaska early in the weekend, and the strength and areal extent of this ridge will affect how Pacific energy is partitioned as it encounters this atmospheric obstacle. In fact, the evolution of the Friday/Saturday storm will also depend upon how this ridge develops.

Two storms on track for Thanksgiving night and Saturday

Two storms will grace the Steamboat Springs area this Thanksgiving holiday, with the first weaker one starting light snows by this Thursday mid-afternoon and the second stronger, colder and longer-lasting storm bringing moderate to heavy snows starting Friday night.

Remarkably, the storm scenario laid out in my last Sunday forecast looks to occur, with the Saturday storm likely producing even more snow than I initially forecast! The first storm has already put down a foot of snow in the Sierras around Mammoth and Kirkwood (see the California snowfall totals here as the storm develops), and clouds will increase through the day today before we see some light snowfall by mid-afternoon. Snowfall will be moderate at times this evening, likely starting around sunset before becoming lighter again after midnight. I still expect 3-6” at mid-mountain by the Friday morning report.

Though we will be between storms on Friday, light snows will likely continue during the day, along with increasing winds that may make travel difficult, especially over the passes. We will see some warming ahead of the second storm from midday Friday through Friday evening before cooler air brings the onset of moderate to heavy snows and continued strong northwest winds starting later Friday night or very early Saturday morning. Difficult travel may well become impossible from Friday night through the day Saturday.

We could see 5-10” of mid-mountain snowfall by the Saturday morning report with continuing moderate to heavy snows for a day of full-on mid-winter storm skiing! The coldest air arrives Saturday afternoon along with a period of intense snowfall, gustier winds and likely whiteout conditions. Though moisture decreases behind the cold air, snow densities will decrease, keeping light and fluffy accumulating snows going overnight and into early Sunday morning, when another 5-10” of snow will likely be reported.

Though Sunday will start quite cold, we should see the sun reappear along with some higher elevation warming, producing a spectacular ski day (especially if new terrain opens!).

After the weekend excitement, a ridge of high pressure is forced eastward by a strong Pacific jet stream and moves over the west early in the work week. Northern Colorado will be susceptible to some dry cool fronts as energy from the Canadian Plains travels down the east side of the ridge and clips our area on Monday and early Tuesday. Wednesday will be the warmest day at higher elevations, and even though the sun will be out, cold low-elevation temperatures will persist as inversions form over the newly fallen snow blanketing the Yampa Valley.

The end of the work week looks uneventful before another storm develops off the West Coast and possibly brings another round of stormy weather to our area around the following weekend.

After several inches of snow fell at the Steamboat Ski Area yesterday afternoon and evening, the next chance of snow in the Steamboat Springs area occurs late on Thanksgiving day and again around Saturday.

Skies will clear this Sunday, with temperatures staying several degrees below our average high of 39 F as a ridge of high pressure moves from the West Coast to the Rockies by midweek. Some energy traveling down the east side of the ridge from the Canadian Plains will graze northern Colorado starting tonight, and other than some clouds and continued below average temperatures on Monday, no additional precipitation is expected.

Dry air overspreads Colorado by Tuesday and Wednesday leading to some gorgeous warm late-fall weather for Opening Day at the Steamboat Ski area on Wednesday. And for those keeping track, the weather forecast model differences discussed in last Thursday’s forecast have been resolved in favor of the European ECMWF which captured the upcoming unsettled weather a day earlier than the American GFS.

So an incoming Pacific storm crosses the West Coast by Wednesday and quickly travels across the Great Basin, first bringing clouds early on Thanksgiving Day and then snows by later in the day that continue overnight This is not a cold system, but we should see snow down to the Yampa Valley floor, with possibly 3-6” at mid-mountain by Friday morning.

Even though the snows may not completely stop, we will be in between storms during the day on Friday as another storm that forms in the Gulf of Alaska around midweek quickly follows our Thanksgiving Day storm. This one will be stronger, colder and longer-lasting, with moderate to heavy snows possible starting late Friday or early Saturday and continuing into the evening. Weather forecast models have not settled on the exact track of the storm yet, but 6-12” of additional snow at mid-mountain is possible during the day Saturday, which will be reported Sunday morning.

We may see some clearing on Sunday along with cool temperatures before another possibly weaker storm is advertised for early in the following work week.

Warm and dry weather follows a small storm for Saturday

Other than a weak storm for Saturday, warm and sunny late fall weather looks to usher in Opening Day at the Steamboat Ski area, which is scheduled for the Wednesday before Thanksgiving.

The beautiful weather this Thursday continues on Friday for Steamboat Springs, with even warmer high temperatures that will be five to ten degrees above our average of 41 F. Our best chance for snow will occur from Saturday afternoon through the night as s small storm currently in British Columbia moves across our area in northwest flow. Cooler air begins moving in early Saturday with snow showers most likely from the afternoon through the night. I would expect only 1-4” at mid-mountain by Sunday morning, with the best snows falling along the Wyoming border.

The sun returns starting Sunday, and after a chilly start, warming will occur first at the higher elevations during the day followed by the lower elevations by later Monday. Gorgeous warm and sunny weather will continue for Tuesday at which point substantial disagreement in the weather forecast models leave hope that we’ll see the chance of snow around Thanksgiving or the following weekend. But the hope is based upon an abrupt change in the prognosis of the usually consistent ECMWF and is at odds with the American GFS. For what it’s worth, the GFS shows a continuation of the dry and sunny weather for Thanksgiving and the following weekend, so stay tuned for my Sunday forecast on how this difference is resolved. 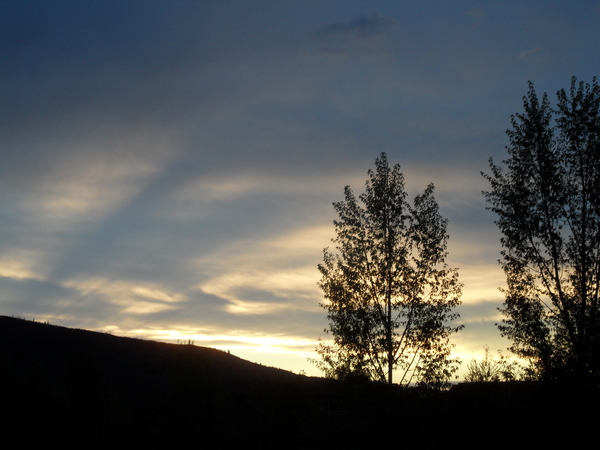