Last day of winter on the third day of summer

Our third summer day in Steamboat Springs this Sunday morning brought another inch of snow on my deck near the base of the ski area and 8” of snow overnight near the top of Mt. Werner. The three day storm is finally winding down, with some peaks of sun already visible in the Yampa Valley. We’ll go from winter this morning to spring on Monday and summer on Tuesday, with the summer weather finally looking like it will hang around for, well, the summer.

There is a lot to talk about with this past storm, as between Thursday night and Sunday morning, it put down around 30” of snow at the top of the Steamboat Ski Resort, along with significant accumulations down to 8500′ and lesser amounts down to the valley floor. 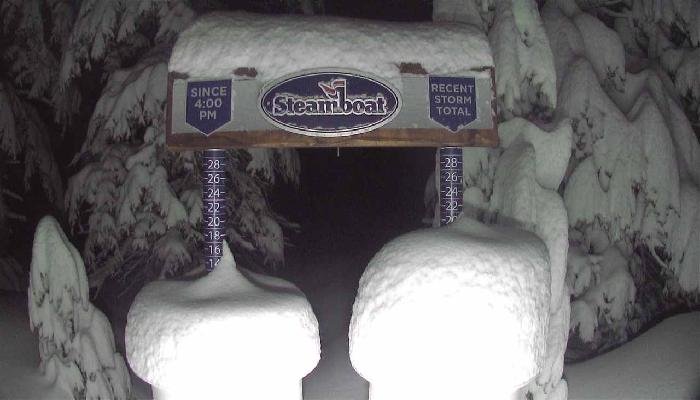 The liquid water equivalents are equally eye-popping, with around 3” reported at the Tower SNOTEL near the top of Buffalo Pass and at the Rabbit Ears Pass SNOTEL, and around 2.5” - 3” reported by CoCoRaHS in the valley, depending on the location. For reference, our average June precipitation in Steamboat Springs is 1.7”, which we had before this storm started! And this after a May with almost twice our average precipitation and a daily temperature 3.7 F below average.

And along with the notable precipitation from this storm was the cold, with the high temperature on Friday of 50 F occurring at midnight, with steadily falling temperatures for most of the day before a high of 39 F was reached at 8 pm. That’s 37 degrees below our average of 76 F on the first day of summer, and was a large enough departure so this one day lowered our average June daily temperature by almost a half degree!

My forecast from Thursday turned out woefully conservative, even though at the time it seemed very aggressive for the first day of summer. The storm was colder, with snowflakes reported in Hayden, and more intense than advertised by all weather forecast models. The Colorado Avalanche Information Center (CAIC) model did come close to the amounts, though with the model running four times per day, only the simulation that started midnight on Thursday as the storm started hinted at such large totals.

As an aside, after talking with Science and Operations Office over at NWS Forecast Office in Grand Junction this morning, it turns out that their balloon-based atmospheric sampling instrument had been down for this storm, and that likely contributed to the under-predictions of the weather forecast models as the center of the storm was poorly sampled.

But really, this is the third storm since the two that ended on 22 May and 29 May that brought around a 20 hour period of snowfall with rates around an inch per hour and snow down to the valley floor. And the cherry on top of the storm last night was the additional 8” of snow that fell by this mid-morning. Snowfall rates this high for this long are unusual even in the heart of winter.

I’m interested in hearing long-time locals thoughts about these past three storms, especially the ranchers and farmers who are keen observers of the weather. Just click the add a comment link below so all can read, and be sure to include any historical context that occurs to you.

So a far more benign forecast is on our plate for the upcoming week. We should see periods of sun this afternoon, interspersed with showers as the very moist surface is heated and interacts with the cold and unstable northwest flow aloft.

Monday will feature plenty of sun as the winds turn from the northwest to the west, with high temperatures approaching, but staying below our 76 F average. There will also be a chance of afternoon and early evening storms, most likely tied to the higher terrain.

By Tuesday, another large and cold storm will drop down the Pacific Northwest coast, forcing a ridge of high pressure to build over the Rockies and bringing much drier southwest flow over our region. High temperatures will finally be around average with only a small chance of afternoon showers.

Further warming and drying is expected for Wednesday and the first part of Thursday as the ridge of high pressure over our area builds further north, and keeps the Pacific Northwest storm at bay. But after only a few days removed from snow, the North American Monsoon may get started as a ridge of high pressure over Florida bulges to the northwest and draws moisture northward along the clockwise flow on its western side. A weak plume of moisture may extend up into eastern Colorado by later Thursday, and it may or may not be far enough west to bring the chance of afternoon showers to our area.

Coincidentally, more incoming Pacific energy dislodges the Pacific Northwest storm eastward by the end of the work week, but the ridge of high pressure over our area will finally have enough strength to deflect the storm to our northwest. It does appear that the ridge will be temporarily deformed enough to push whatever monsoonal moisture plume that may be over our area to the east, leading to a warm and dry start to next weekend.