After a typical summer day today, the remnants of a sub-tropical wave currently to our west and the monsoonal moisture plume already in place will conspire to make heavy rain likely over most of Colorado tomorrow. Since the wave is moving slowly and is composed of several pieces of energy, the threat of heavy rain will also be present for Wednesday.

An interesting development is that this sub-tropical wave looks to drag some cool air over our region on Wednesday as it interacts with the STILL present Hudson Bay vortex. This frontal boundary is forecast to persist for part of the day in our vicinity and may lead to more organized storms with heavy rain and possible hail on Wednesday. Some dry air behind the front should quickly end the storms after the front finally moves through the area, currently forecast for later that day.

Thursday should be a nice day, but another weaker wave is forecast for Friday which will likely increase the threat of heavy rain again. There may be some interaction between this wave and the currently weakening tropical cyclone Herman off the southern coast of Baja, so the details for Friday are uncertain. Again, this wave is forecast to be followed by some drier air which should make for a nice weekend if it occurs, though the monsoon looks to be re-established early in the following workweek.

Rain likely today and tomorrow with decreasing chances through the weekend

A moist monsoonal moisture plume has invaded our area over the last 24 hours which will increase the threat of rain and make it likely, especially for today and possibly for tomorrow as well. Coincidentally, an upper level low currently along the northwest US - Canadian border has flattened the summertime ridge over the Rocky Mountains and will provide further energy for organized storms, especially tomorrow afternoon, with some of these storms possibly persisting in the evening before ending later that night.

This wave to our north will bring seasonably cooler temperatures to our region through the day on Saturday and especially for Sunday. Showers may occur Saturday though the cooler air forecast for Sunday may preclude shower development.

As the upper level low along the Canadian border continues its eastward progress, the western ridge rebuilds and drags another plume of monsoonal moisture northwards for Monday and Tuesday. Additionally this surge will be accompanied with some upper level lifting from the south which will substantially increase the chance of significant rains for those days.

There may be a break in the monsoonal pattern around midweek before it looks to become re-established for next weekend, though there is a fair bit of uncertainty in the model forecasts for that time period.

Standard summer weather on tap for the next week

Fairly standard summer weather is forecast for our area over at least the next week. Cool air left behind by the passing wave on Wednesday will keep showers away for today, but the threat of afternoon storms returns for Friday and the weekend as the summer ridge rebuilds over our area and draws moisture from the south over Colorado.

A passing wave well to our north on Monday interrupts this monsoonal flow for a day or two, but atmospheric moisture re-establishes itself by midweek leading to an increased chance of afternoon or evening storms.

Atmospheric moisture has substantially increased in the last 24 hours as the clockwise circulation around a ridge over the Rocky Mountains draws moist air northwards into our area. This increase in moisture combined with high afternoon temperatures will lead to an increasing chance of showers this afternoon and extending through the end of the workweek. Additionally, a wave moving along the Canadian border on Friday will increase the likelihood and strength of showers, making that day the wettest day of this forecast period with showers possibly developing as early as noon.

Though this monsoonal moisture is suppressed to our south with the passing of the Canadian wave for the weekend, there should be enough existing moisture for a small chance of slow-moving afternoon showers on Saturday with even less of a chance for Sunday.

Next Monday will be similar to the preceding Sunday before that Canadian wave intensifies and moves into the upper midwest early in the workweek. This will again increase the likelihood and strength of showers for Tuesday and Wednesday of next week. After that, models forecast westerly flow aloft which will cut off the monsoonal moisture plume and allow for drier conditions heading into the following weekend. 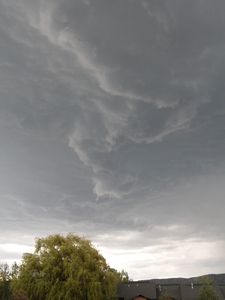 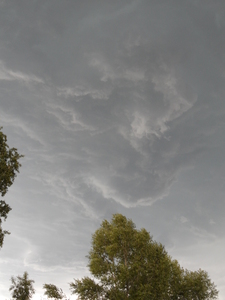 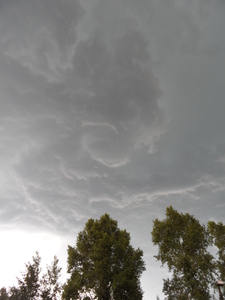