Moderating temperatures and increasing shower chances for the weekend

Temperatures are already in the mid-eighties this Thursday afternoon along with some developing storm clouds along the higher terrain. The current stretch of unseasonably hot temperatures this week will cool a couple of degrees each day through early next week, along with good chances for afternoon and evening showers thanks to another surge of monsoonal moisture.

A ridge of high pressure extending through the Rocky Mountains is currently sandwiched between broad areas of low pressure located off the Pacific Northwest coast and Hudson Bay. Clockwise rotation around the center of the high pressure located just to our north near the Wyoming border is bringing winds from the southeast and east overhead, which is unusual and opposite of what normally occurs. 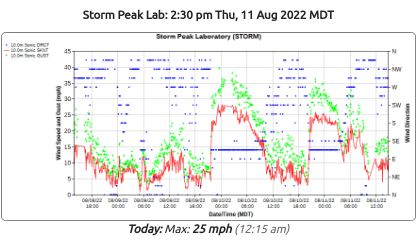 Bob Adams airport recorded a high temperature of 92 F at 5:15 pm DST yesterday thanks to the ridge of high pressure, but we also saw elevated temperatures and winds in some areas of town on Tuesday and Wednesday as shown in the accompanying time series for the last three days of temperature at my weather station near the base of the Steamboat Ski Resort and winds near the top. Note the temperature spike from 64 F to 74 F just before midnight on the 10th and the near 80 F temperatures that extended through midnight on the 11th in the first chart. Also note the strong winds from the southeast observed near the top of the mountain each night, which carried the mountain-top air down the slope of the Park Range where it warmed as it descended.

The low pressure area off the Pacific Northwest coast is forecast to rotate and weaken as it is forced into the Canadian Rockies through the weekend by yet another mass of cold air currently moving over the Aleutian Islands. This will weaken the ridge of high pressure overhead and nudge it eastward, which will allow monsoonal moisture from the south to move overhead.

The storms today will probably be confined first to the higher elevations before they move off the terrain and bring a threat of showes to the lower elevations through this evening. As the high pressure continues to move to our east tomorrow, winds switch to be from the south with a better chance of showers for the afternoon and evening as monsoonal moisture is brought overhead, and high temperatures drop a few degrees.

More of the same is expected for the weekend and into early next week as the ridge of high pressure is nudged further to the east, eventually forcing winds to be from the southwest and west in the more usual pattern. While high temperatures continue to drop a few degrees each day, reaching our average high of 82 F by Sunday, there are also likely to be areas of energy rotating around the high pressure for Sunday and early next week which will provide a better environment for wetting rains.

So be on the lookout for storms moving in the opposite direction of what you’re used to today, and check back for my next regularly scheduled weather narrative on Sunday afternoon where I’ll discuss the prospects for another week of monsoonal shower chances.

Warm and dry weather to start the work week

Mostly sunny skies with temperatures in the upper seventies, on their way to the low eighties, are over the Steamboat Springs area early on this delightful Sunday afternoon. Temperatures will rise into the mid eighties on Monday and upper eighties on Tuesday and Wednesday along with meager precipitation chances before temperatures cool and precipitation chances increase for the end of the work week and next weekend.

A weak and dry cool front this morning will keep our high temperature in the low eighties today, which is right around our average for this time of year. An eddy cut off from the main jet stream is currently spinning off the northern California coast, and winds from the south ahead of the eddy will bring warm and dry air northward as a ridge of high pressure builds over the West Coast on Monday and Tuesday.

So expect rising temperatures and dry weather through midweek, with Monday expected to be in the mid eighties while Tuesday and Wednesday will see the hottest temperatures of the week as they threaten the ninety degree mark.

Shower chances are expected to increase as soon as later Thursday, with higher chances currently forecast for Friday and the weekend as the California eddy first moves northward toward Vancouver by the end of the work week and then eastward along the Canadian border through next weekend. Note that the forecast for next weekend is similar to the wet forecast made a week ago for this weekend, which did not verify, so be sure to check back Thursday afternoon for my next regularly scheduled weather narrative to see if the wetter weekend forecast stays consistent.

Sunny skies with temperatures in the low eighties, on their way to the upper eighties, are over the Steamboat Springs area early this Thursday afternoon. What was looking like a wet weekend only a couple of days ago has trended significantly drier, with the best storm chances now limited to Friday afternoon and evening.

A ridge of high pressure is currently sitting over most of the continental U.S while one area of low pressure is located just east of Vancouver and another exists as an eddy off the West Coast. While the bulk of the Vancouver storm will move east across the Canadian Plains over the next two days, some of that storm elongates southwestward toward the eddy off the West Coast, eventually forming an additional small storm that is forecast to move across Montana and drag a cool front through our area early Sunday.

While these pieces are evolving to our northwest, a wave moving through the monsoonal moisture plume located on the backside of the large ridge of high pressure is forecast to move northward through Nevada on Friday and Idaho on Saturday as it merges with the eventual Montana storm.

Earlier in the week, the storm around Vancouver was forecast to stay north of our area, allowing that disturbance in the monsoonal flow to move overhead through the weekend, but the elongation of the Vancouver storm to the southwest has changed that trajectory. So while we will still see good chances for afternoon and evening storms on Friday, a much drier Saturday and Sunday is now in our future as the monsoonal moisture plume is forecast to split to our northwest and southeast. There may still be a passing shower around, especially early Sunday as a cool front grazes our area, but the threat of widespread rainfall is all but gone.

While the elongation of that Vancouver storm to the southwest destroyed our precipitation chances for Saturday and likely Sunday, the cooler air associated with the further southern extent of the storm will grace our area for the weekend, with high temperatures eventually cooling into the low eighties by Sunday, which is a couple of degrees below our now declining average of 83 F.

Dry weather and increasing temperatures are expected for the bulk of the following work week, with another monsoonal surge of moisture currently predicted for next weekend. Be sure to stay tuned to my next regularly scheduled weather narrative on Sunday afternoon where I’ll discuss how hot the coming work week will be as well as any changes to the weather forecast for next weekend.