Hot and dry weather continues ahead of some moisture next weekend

The hot and dry weather continues in Steamboat Springs this week, with sunny skies and a noontime temperature of 80 F observed at the Bob Adams airport this Sunday. Expect mostly sunny skies and occasionally breezy winds from the west and southwest this work week, with high temperatures in the upper eighties and cool overnight lows in the lower forties. There may be a some moisture returning to our area for next weekend, though at this time the amounts appear modest at best.

The biggest weather impact this week in the Steamboat Springs area this week is likely to be smoke from the Pine Gulch fire near Grand Junction, which was almost at 24,000 acres as of last night and was sparked by lightening on July 31. Unfortunately, the primary wind directions from the southwest and west this week looks to transport smoke at times from the fire into our area, which was first noticeable this past Friday afternoon.

Aside from the smoke, a couple of weather systems will travel across the southern Canadian Plains this week, with the first passing north of our area today and tomorrow and the second taking a similar track through next weekend. These storms will not affect our temperatures much, with highs still expected to be in the mid to upper eighties through the week and above our average of 82 F, and lows in the lower forties and even upper thirties for low-lying areas, several degrees below our average of 45 F.

But the storms will create breezy conditions, especially in the afternoons and early evenings, as winds from the west associated with the storms, and southwest between the storms, descend to the surface.

Most of the low pressure area currently off the California Coast discussed in the last weather narrative this past Thursday is now forecast to move westward into the Pacific, so it does not look like we will see any moisture from that system. However, a tropical storm that is forecast to move south of the Baja peninsula late in the work week may inject some moisture into the atmosphere in the generally southwest flow over the Desert Southwest.

Admittedly, weather forecast models are pessimistic for precipitation from this moisture, which would be over our area through the upcoming weekend, but it is likely we would see at least some clouds which would offer some relief from the hot afternoon temperatures. I’ll have a better idea of what next weekend will hold by my next regularly scheduled weather narrative on Thursday afternoon.

Partly sunny skies and temperatures in the mid-eighties are over the Steamboat Springs area this Thursday afternoon. Generally, we’ll see decreasing clouds and high temperatures in the mid-eighties through the upcoming week as very dry air moves overhead. There may be a chance of some moisture returning around the end of the next work week, though that was also the case for today in last week’s forecasts.

The storm complex will be too far to our north for much more that some increased breeziness for the next couple of days, first from the southwest through mid-weekend and then from the west, but much drier air will displace the modest moisture we’ve had in the atmosphere for the last few days. Lots of sun and high temperatures in the mid-eighties, several degrees above our average of 82 F, should be seen through the upcoming week, with the dry air returning our overnight low temperatures from the recently observed fifties closer to our average in the mid-forties.

By midweek, another storm from the Gulf of Alaska is forecast to absorb the old storm off the California coast as it crosses the West Coast. There is a chance for monsoonal moisture to return to our area for the end of the work week in the southwest flow ahead of the storm complex, though at this point the moisture surge is not looking substantial. I’ll know more about this by my next regularly scheduled weather narrative on Sunday afternoon.

The temperature in Steamboat Springs is already up to 82 F on this Sunday noon, again on its way to the upper eighties. Despite the mostly dry weather, we will see chances of afternoon and evening storms through most of the upcoming week, most prevalent at the higher elevations, that will likely produce more wind than rain. Whether we see rains in the Yampa Valley or not, clouds will block the sun at times which will bring a temporary respite to the heat.

A strong ridge of high pressure is currently over the Inter-mountain West, with strong areas of low pressure in the Gulf of Alaska and the Midwest. Further east, Tropical Storm Isaias is just off the eastern Florida coast and will be directed northward along the length of the Eastern Seaboard early this week in the southerly flow between the MidWest area of low pressure and the summertime Bermuda high pressure system.

A ribbon of moisture between the ridge of high pressure to our west and the low pressure over the Midwest will allow afternoon and evening storms to form through midweek, most numerous in the high country. However, the dry lower levels of the atmosphere will force most of the precipitation to evaporate before reaching the ground, yielding mostly gusty and erratic winds, though brief heavy showers are a possibility. Expect hot temperatures in the upper eighties or even broaching ninety, which is above our average of 82 F.

A couple of storms from the Gulf of Alaska will travel north of our area early in the work week and again over the weekend. The first leaves some energy behind that forms a weak area of low pressure off the California Coast which is then picked up by the second storm. Weather forecast models agree that some moisture ahead of the California system may be forced northward over our area around Thursday and Friday, though they disagree if there will be enough for wetting rains.

Precipitation chances fall to near zero around the following weekend as the Gulf of Alaska storm passes to our north and introduces very dry westerly flow, and longer-range weather forecast models have this dry flow persisting into the following work week. I’ll be discussing the possibility of the end-of-workweek showers on my next regularly scheduled weather narrative on Thursday afternoon.

Meager rain chances and hot temperatures for the upcoming week

The storms will be close enough to our area, however, to produce breezy afternoon and early evening conditions at times through the weekend. Additionally, there will be a small chance of some high elevation showers, but these would likely produce more wind than rain as most of the precipitation will evaporate in the very dry atmosphere before reaching the ground.

Other than that, expect hot temperatures with highs around five degrees above our average of 82 F and comfortably cool nights with lows within about five degrees of our average of 46 F. Incidentally, I now see the first decline in our average daily temperature this season, available on the SnowAlarm home page under the Local Temperatures, Winds & Precipitation heading, indicting the average hottest part of the summer is behind us.

By early in the work week, one of the storms from the Gulf of Alaska will be strong enough to deform the ridge of high pressure, bringing more dry air and breezy westerly winds by Tuesday, along with the elimination of the small shower chances over the high country for several days.

The ridge of high pressure then rebounds over our area before being pushed to our east, with the location of the ridge determining whether we see the return of some monsoonal moisture. As of now, there is some loose agreement among the weather forecast models that we will have a chance of showers returning just before or during the following weekend.

I’ll know more about this possibility by the time my next regularly scheduled weather narrative is penned on Sunday afternoon.

Steamboat Springs has reclaimed its usual sunny morning on this Sunday, with a small chance for some showers later today. Another mostly dry day is forecast for Monday ahead of a good chance for wetting rains on Tuesday. The weather pattern then shifts to warmer and drier weather starting midweek.

We saw a far more dreary Saturday morning than I expected in my Thursday forecast, thanks to the drier air taking a half-day longer to arrive. The drier air and more stable atmosphere here now are due to more westerly flow associated with a storm traveling across the Canadian Plains, so we’ll see only a small chance for showers both later today and later Monday.

An area of low pressure currently just west of California will be pushed across the Great Basin tomorrow by a strong storm forecast to develop in the Gulf of Alaska. The southerly flow ahead of the storm will increase the atmospheric moisture again, and that moisture will combine with the upward motion associated with the storm to produce a good chance of wetting rains for most of Tuesday. Expect cool temperatures ten degrees or so below our average high of 82 F.

The flow switches from the south on Tuesday to the west and eventually the northwest by Wednesday behind the storm. Much drier air is forecast over our area by then, with only a small chance of afternoon showers in the somewhat unstable northwest flow.

Additionally, the summertime ridge of high pressure reforms over the Great Basin, which brings very dry air, almost no chance for precipitation and hot temperatures five to ten degrees above average over our area starting Thursday and likely extending through next weekend.

There may be a chance for moisture to return sometime later in the following week, though there is not a strong signal in the longer range weather forecast models. I’ll have a better idea about that by my next regularly scheduled weather narrative on Thursday afternoon. 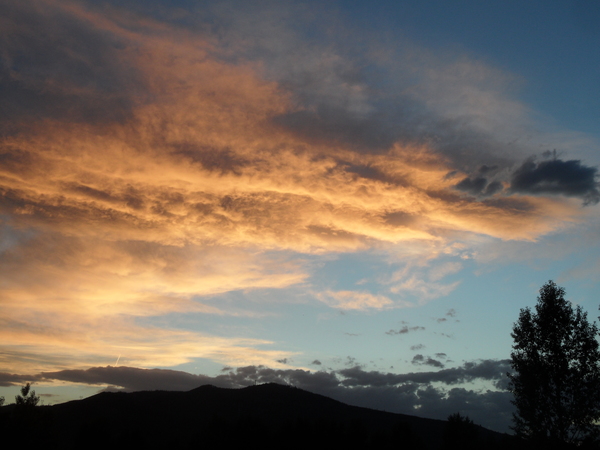