Snowy upcoming week, except for Friday and Sunday

Snow showers have started up again this Wednesday afternoon in Steamboat Springs as a weak cool front in northwest flow approaches north-central Colorado. The briefly moderate snowfall intensity this afternoon will become lighter behind the front tonight and taper off during Thursday night. Most of Friday and Sunday look to be precipitation free with some light snow likely from Friday night into Saturday morning, but a couple of more storms forecast for later Monday and Wednesday will keep snows going for most of the upcoming week.

A ridge currently over the West Coast has directed moist northwest flow over the Rockies. A wave in this flow will bring a cool front through our area this afternoon, leading to breezy winds and generally light snow showers which could briefly become moderate. On top of this mornings report of 3.5” at mid-mountain and 4” up top, the snow report for Thursday morning should again be in the 2-5” range.

Though light snow could continue through Thursday night, warmer air aloft ahead of our next small storm for Friday night will stabilize the atmosphere and limit accumulations to 1-4” by Friday morning.

Though the daytime hours of Friday are likely to be precipitation-free, a weakening storm moves over our area from Friday evening through Saturday morning. I would expect total accumulations to be another 1-4” by noon on Saturday.

A ridge of high pressure then moves over the West during the weekend, allowing snows to cease from Saturday afternoon through Sunday night. But the break in the weather will be short-lived as another weakening storm moves over our area Monday followed by a better-looking storm for Wednesday. Light snow between the storms is currently advertised for Tuesday and again after the storm on Wednesday, making for a snowy upcoming week.

Some sort of ridge of high pressure is forecast to move over the West around the following weekend which should stop the snows and allow the sun to reappear for a time.

Snow chances for Tuesday through Thursday

A cool and mostly cloudy Sunday morning in Steamboat Springs should give way to more sun this afternoon and temperatures warming in town to around our average high of 27 F. Though Martin Luther King Jr. Day will be the sunniest and warmest of the long holiday weekend, a couple of storms will bring the chances for snow from Tuesday through possibly Thursday before the weather turns nicer for next weekend.

Currently, a ridge of high pressure over the West Coast is moving eastward thanks to some incoming Pacific energy and moisture. The ridge is forecast to move over our area on Monday, allowing for plenty of sun and warming temperatures.

The first of the two Pacific storms moving over our area will be relatively weak and warm, and should start light snow showers in the Steamboat Springs area on Tuesday. Even at this close range, there is weather forecast model disagreement on the amount of snow for the the Wednesday morning report, but 2-5” is a reasonable guess at this time.

It looks like there won’t be any break between the two weather systems, with the second one keeping snow showers going during the day Wednesday. This one will cross the Pacific Northwest coast on Tuesday and contain colder air originally sourced from Siberia. But as you may expect with the model disagreement on Tuesday, there is even more on Wednesday, as the European ECMWF keeps the storm more consolidated and moves it east of our area by early Thursday as compared to the American GFS, which moves the storm more slowly and has additional energy keeping favorable moist northwest flow over our area through Thursday.

There are enough differences that I will commit to moving my usual Thursday weather narrative to Wednesday in the hopes of gaining clarity on the eventual speed and strength of the storm. We could see as little as 1-4” by Thursday morning if the European model verifies, or as much as 4-8” by Thursday morning with an additional 1-4” during the day if the more optimistic American GFS verifies.

Remarkably, weather forecast models agree on a building ridge of high pressure for Friday and the weekend. Though the temperature forecast is uncertain, as the American GFS keeps much colder temperatures around longer as compared to the European ECMWF, we should see plenty of sun through next weekend.

Another Pacific storm is forecast to approach the West Coast late next weekend or early the following week, with the European ECMWF stronger and more consolidated than the weaker and more disorganized American GFS. We may see some effects from this storm by around the following Tuesday.

Drying and then warming heading through the holiday weekend

The blustery Friday storm arrived as advertised in the Steamboat Springs area, and though snowfall totals were likely less than forecast, it was hard to tell with the blowing snow. But the weather improves through the long Martin Luther King Jr. Day weekend, with the holiday on Monday being the warmest and sunniest day of the upcoming week. A modest storm is forecast for Wednesday and Thursday of next week, followed by some weak ripples in a disorganized jet stream that may bring a small chance of light snow showers heading into the next weekend.

Behind today’s storm, we’ll see a cold start to Saturday, with high temperatures on Mt. Werner likely staying in the teens, along with some sun and clouds. A ridge of high pressure starts to build over the West on Sunday for warmer temperatures, though we will still see a mix of sun and clouds, before the nicest day of the week arrives on Monday with sunny skies and warm temperatures.

But a strong storm forecast over the Gulf of Alaska will keep the ridge of high pressure moving as it pounds the Pacific Northwest through the weekend before making landfall around Monday. We should see some clouds ahead of the storm on Tuesday before it moves over our area on Wednesday and Thursday. Though there is some cold air from Siberia associated with the storm, there is weather forecast model disagreement on storm strength and amount of moisture, and that will affect the amount of snow we may see from this system.

A relatively weak and disorganized jet stream is forecast to follow the midweek storm and may bring some clouds and higher-elevation snow showers for the end of the work week and the beginning of the next weekend.

I have been having internet issues with the local cable provider in Steamboat Springs this morning, and wanted to put out a quick forecast for the Friday storm ahead of my usual weather narrative that will have to wait until Friday.

A well advertised storm will affect Colorado on Friday. The quick-moving storm will bring a cold front through our area within a few hours of noon on Friday, with strong southwesterly winds ahead of the front shifting to the west during frontal passage and the northwest behind the front.

The strong winds will created banded snowfall ahead of the front with localized snowfall rates around an inch or two per hour for areas under the bands, though light snowfall should occur early in the morning. The front itself should be quite impressive, with localized snowfall rates up to 3” per hour for a short time before more consistent snows occur in the favorable moist, cold and unstable northwest flow behind the front.

Travel will likely be difficult during the storm, probably at its worst between 9 am and 3 pm or so. Snows will become showery and taper off later in the afternoon and evening before ending before midnight, We could see as much as 6-12” on the cold Saturday morning report, almost all of which will have occurred during the day Friday.

After 7” was reported this morning at the Steamboat Ski Resort, and 10” up top, snow showers have picked up again this Sunday afternoon ahead of the first in a total of four more storms expected this work week in Steamboat Springs. A second storm is forecast to move through our area on Monday with a break in the weather advertised for Tuesday. The third, and unfortunately weakening and north-trending storm is timed for Tuesday night into Wednesday before the fourth and final promising storm moves across later Thursday into Friday.

Three day snowfall totals range from 18” at mid-mountain and 21” up top as of Sunday morning, and these will be added to through our last storm in this series on Friday. All of the snow is courtesy of a strong and active Pacific jet stream from the northwest that is moving through and over a ridge of high pressure over Alaska. The moist Pacific air has been mixing with cold air from western Canada as it flows southward along the eastern periphery of the Alaska ridge.

And before I discuss what may be, I’ll briefly mention that the snows this past Friday morning were not predicted by the couple of shorter-range forecast models I look at. My guess is the moisture was under-forecast Thursday night, leading to a couple more inches than expected. But the big miss was the 6” on Friday morning that was likely due to eddies of moisture and energy that broke away from the splitting storm and moved over our area. While it may be tough to forecast, it is really not all that surprising as the Steamboat Springs area often overachieves in cold and moist northwest flow.

Moving on, I would expect 2-5” of snow for the Monday morning report, with snow continuing through the day that will accumulate an additional 3-6” to be reported Tuesday morning. Accompanying this wave will be stout westerly winds of up to 30 mph, gusting to as high as 60 mph during Monday, and this may affect snow quality on the predominantly west facing Mt. Werner, as well as lift operations. Additionally, travel over the passes will likely be difficult at times from at least mid-morning Monday through mid-afternoon as there will be blowing snow.

We should see a break in the snows during the day Tuesday, though it is not clear if they end or just significantly decrease in intensity, with similar winds to Monday. By Tuesday evening, a third storm travels over our area, though weather forecasts models have trended weaker and further north with this feature, forecasting snows Tuesday evening that end around midnight. Therefore I am less optimistic with snow amounts on this one than I have been for the last several day, and currently only expect 2-5” for a cold Wednesday morning ski report.

Thursday should be snow-free ahead of a quick-moving but good looking storm for Thursday night or Friday. This will be the last storm to mix with cold western Canadian air for at least several days as Pacific energy is forecast to undercut the ridge of high pressure over Alaska and introduce a milder and drier weather pattern to our area as the jet stream shifts a bit to the north. This Friday storm may also draw some moist subtropical air in from the southwest, creating a cold and wet storm that is looking to leave at least 6-12” of snow, and possibly more by the time it wraps up on Friday night.

Though we may see some snow showers mid-weekend, or not, quieter weather looks to last into the following work week. 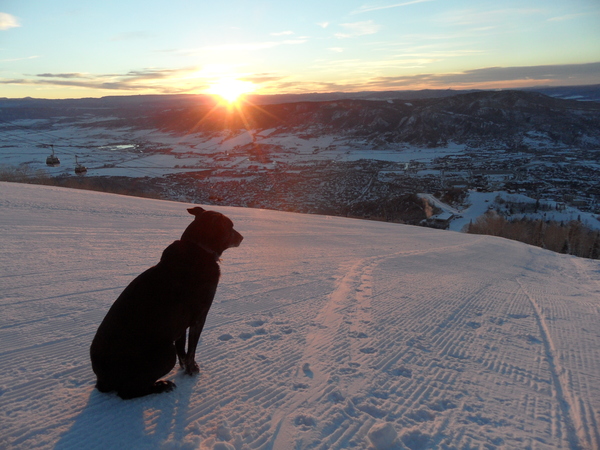